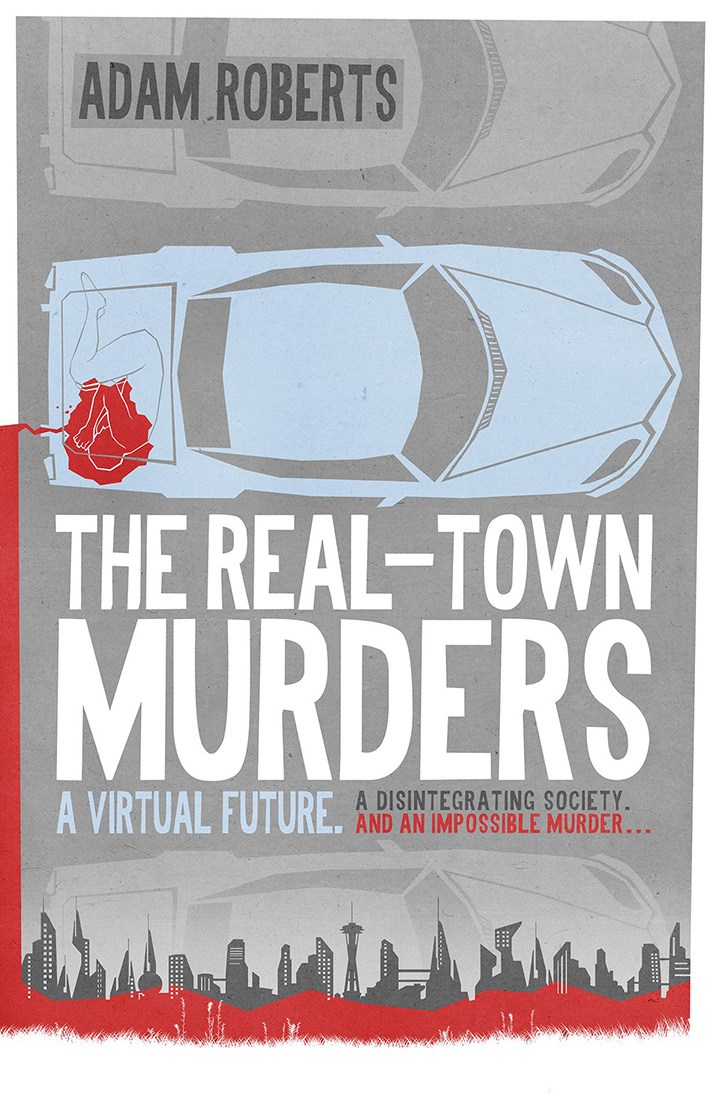 In a previous review about Adam Roberts’s novel The Thing Itself, I stated that Roberts’s forte is taking older works of science fiction and re-imagining and reinvigorating them for the twenty-first century. The Thing Itself somewhat deviated from this mould by using the science-fictional framework for an exploration of Kantian metaphysics, but there was still a strong sense of homage throughout the work. Roberts continues this trend in his latest novel, The Real-Town Murders, which fuses science fiction and crime thriller in a loving homage to Alfred Hitchcock.

Alma is a private detective in a near-future England, a country desperately trying to tempt people away from the delights of Shine, the immersive successor to the internet.

Her partner is ill, and has to be treated without fail every four hours, a task that only Alma can do. If she misses the five minute window her lover will die.

So when Alma is called to a car factory to be shown an impossible death and finds herself caught up in a political coup, she knows that getting in too deep may leave her unable to get home.

Alma must dig into the conspiracy, evade arrest, try to work out how a body appeared in a freshly-made car in a fully-automated factory, and get home.

Or another death will be on her hands…

As with his other novels, Roberts’s wit and inventiveness are on full display. The novel reads like a science-fictional Hitchcock thriller, with Alma’s investigation of the murder leading her to be caught up in a power struggle between rival governmental factions, each trying to entice the population either into virtual reality or back to the Real world. This dichotomy – Real and virtual – fuels the conflict throughout the novel. It is set against the backdrop of R!-town, a deserted and decaying future Reading, which has been comically rebranded in a futile attempt to attract its residents back to the Real world. England’s manufacturing industry is in crisis as business and life increasingly take place online. It’s a dystopian future that feels a little bit too real.

Alma is a wonderful guide to this bleak landscape, a gumshoe whose jurisdiction and expertise is limited to the Real world. Her partner is inflicted with an insidious form of genehacked lipid cancer which is linked to Alma’s DNA, meaning that Alma is the only one capable of administering the required treatments every four hours. A lot of the suspense in the novel is derived from Alma’s need to return to her apartment every few chapters. Although this does become tiresome as a plot device, creating a sense of repetition and somewhat limiting Alma’s potential for growth, the countdown functions to lend urgency to certain scenes, building a taut and effective thriller.

Roberts balances a multitude of generic conventions with practised ease, reminding us that science fiction and crime have had a long and fruitful partnership. The murder which opens the novel is a classic locked-room mystery that heavily utilises concepts from science fiction, an approach that Roberts perfected in his 2012 novel Jack Glass. Roberts delights in these sorts of mysteries – murders which occur under impossible circumstances, where the laws of physics seem to be challenged. Jack Glass memorably featured the faster-than-light gun, which confused cause and effect. The Real-Town Murders features a murder which may be less spectacular, but nevertheless provides a real sense of mystery right through until the last couple of chapters. Roberts isn’t an author who treats science fiction tropes with glib abandon: he thoroughly examines each premise with meticulous detail. How would this concept transform society? What are the social and economic implications of this technology? Yet, once he’s finished his worldbuilding, he is not afraid to play games with our suspension of disbelief, as if mocking the reader for believing in all this science fiction mumbo-jumbo in the first place.

Part of the genius of the novel is that it is set entirely in the real world. Roberts resists the temptation to give us even a glimpse inside the virtual paradise of the Shine. Science fiction has long been obsessed with exploring virtual worlds, from Gibson’s Neuromancer to The Matrix to Cline’s Ready Player One. Worlds where anything can happen create interesting narrative possibilities, but Roberts recognises that an equally interesting landscape is the real world that is left behind when everybody has migrated online. As characters are forced to interact in person, the extent to which their social skills have atrophied becomes an ongoing joke. Pop culture references are in abundance, but the majority of them go high over the characters’ heads, leaving them disoriented and anxious as they attempt to negotiate the real world.

Roberts’s depiction of an increasingly depopulated and insular England speaks to a society rocked by the uncertainties of Brexit. Indeed, the shadow of Brexit looms large on every page of this novel, and Roberts may have the dubious honour of being the first author to import the anxieties of Brexit into the discourse of science fiction. The failure of manufacturing, economic turmoil, and government infighting are uncomfortable mirrors to reality. Yet his realisation of a near-future England feels eerily similar to stories we’ve seen in past generations: namely, the post-war British science fiction of John Wyndham and John Christopher. Brian Aldiss called these types of stories “cosy catastrophes” – pessimistic tales about a post-disaster England in which a group of people stoically resist the inevitable social collapse. Roberts has recycled and reinvigorated these themes for the Age of Brexit. The result is an uncanny mix of old and new, familiar and unfamiliar.

Readers who are acquainted with Roberts will recognise his signature humour and wit. His academic interest in the history of literature – especially science fiction – continues to shine through, providing a wealth of obscure literary references which I am almost hesitant to admit that I enjoyed, because it makes me sound like a pretentious twat. But it is certainly interesting charting the repetition and growth of themes across his oeuvre. A noticeable commonality is protagonists who subscribe to a philosophy of il faut cultiver notre jardin – a motif which would reward further analysis.

When you put aside the science fiction and the Brexit politics, it’s the homage to Hitchcock which really defines this novel. Most of the the chapter titles are sly parodies of famous Hitchcock films, and a couple of scenes, especially in the latter half of the novel, are clever re-imaginings of iconic Hitchcock moments. Roberts even continues the tradition of Hitchcock appearing as a cameo. I took particular delight in the novel’s cover art, which riffs on Saul Bass’s iconic posters for Hitchcock’s films. The homage may be to the Master of Suspense, rather than the science fiction luminaries who influenced Roberts’s earlier works, but The Real-Town Murders makes clear that it is the idea of homage itself which ties his oeuvre together.

The Real-Town Murders demonstrates, once again, that Adam Roberts is at the forefront of British science fiction.