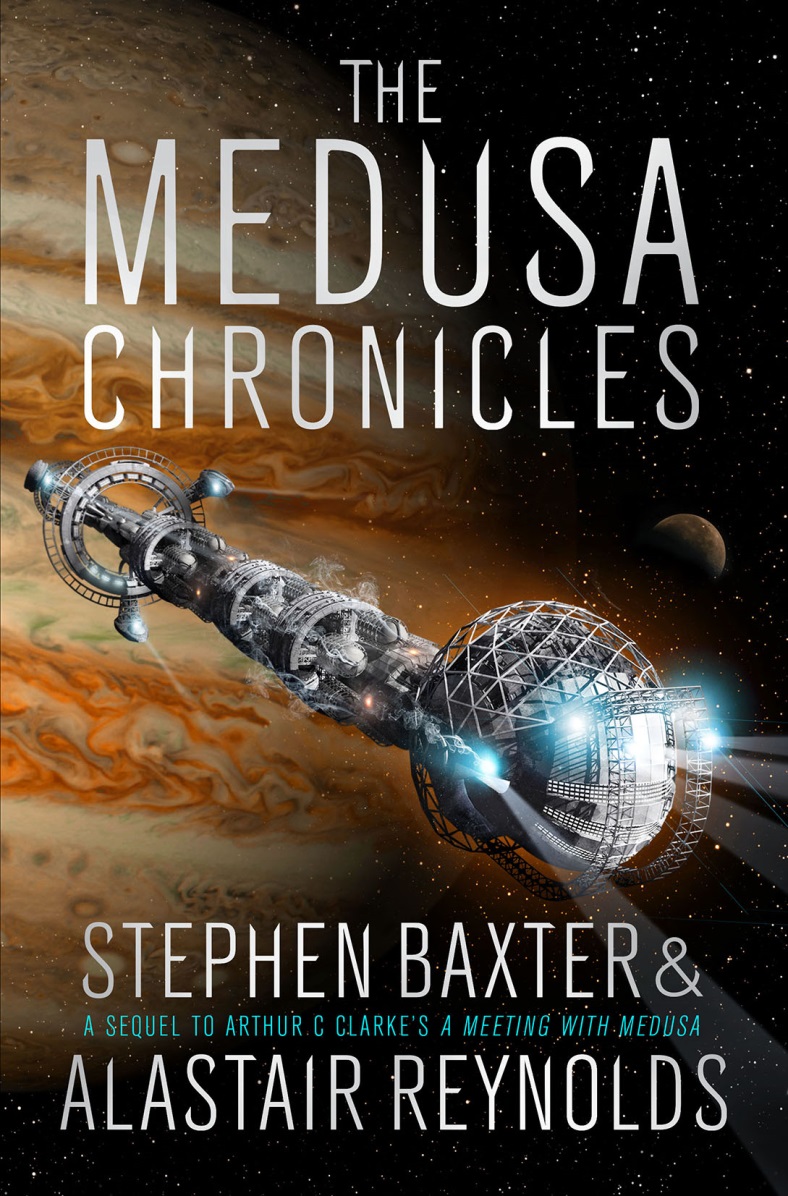 September and October are always busy months at my university – students are submitting their dissertations, assessments need to be marked, and the overall pace of life means that I’ve found little time for writing in the last few weeks. Reading a good science fiction novel has always helped me to unwind, and there’s few authors who feel as comfortable and familiar to me as Arthur C. Clarke. Unfortunately, I’ve read his novels so many times that it’s hard to find new meaning within their pages. So it was with a mixture of excitement and trepidation that I recently picked up The Medusa Chronicles, by Stephen Baxter and Alastair Reynolds, which is written as a sequel to Arthur C. Clarke’s 1971 short story “A Meeting with Medusa” and functions as a homage to his wider work. 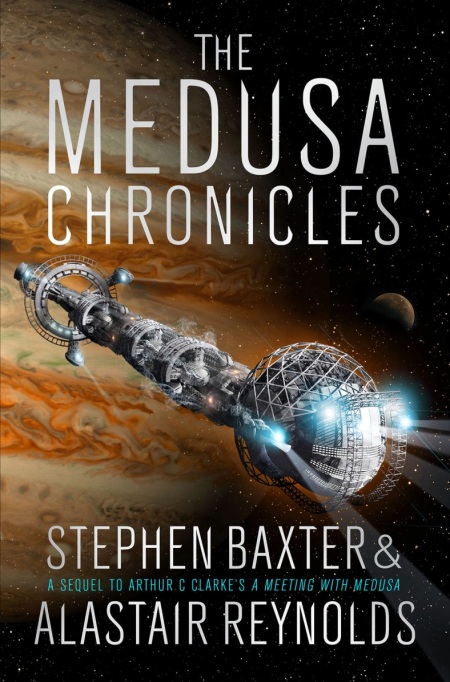 “A Meeting with Medusa” was one of Clarke’s last pieces of short fiction that gained critical acclaim. Set in the late twenty-first century, it follows Howard Falcon as he is mortally wounded in a dirigible crash in the Grand Canyon. His life is saved by experimental surgery that transforms him into a cyborg – a bridge between humankind and machines. Feeling isolated from the rest of his species, Falcon tests his superhuman capabilities by piloting a solo balloon mission into the uppermost clouds of Jupiter. There, he encounters a complex aerial ecology, dominated by creatures called “medusae.” The novel ends with a hint that Falcon’s journey is just beginning: he “took sombre pride in his unique loneliness – the first immortal, midway between two orders of creation. He would… be an ambassador… between the creatures of carbon and the creatures of metal who must one day supersede them. Both would have need of him in the troubled centuries that lay ahead.”

The Medusa Chronicles is the story of those troubled centuries, as Falcon embraces his role as ambassador between humans and machines. The novel explores how the machines attain sentience in the isolated reaches of the Oort Cloud and begin to plot against their human masters. When war is inevitably declared, the machines begin a shocking transformation of the solar system that puts humanity in danger of extinction. It’s here that Baxter and Reynolds really excel – their descriptions of planets been torn apart and used for engineering projects on the largest scale are some of the highlights of the novel, concepts that are just as awe-inspiring as the ideas once proposed by Clarke. As the story moves further into the future and interplanetary war consumes the entire solar system, Falcon realises that ending the conflict may come with an unthinkable price.

This book feels like an Arthur C. Clarke novel. I was impressed with how much detail Baxter and Reynolds managed to extract from a single short story. They have mined “A Meeting with Medusa” for the most minute details, building on its themes and embracing its unique vision of the future. Reading their novel gave me a renewed appreciation of Clarke’s story – it almost feels like Clarke wanted someone to turn his story into something bigger. And Baxter and Reynolds have proven themselves more than capable of the task. Baxter, in particular, has an established record of writing sequels to older works of science fiction, including The Time Ships (1995), a sequel to Wells’s The Time Machine. He also worked with Clarke on the Time Odyssey series, making him the logical choice to expand upon “A Meeting with Medusa.”

Clarke’s short story was written in 1971 – it is not surprising that large parts of it, particularly his depiction of technological development, have already been made obsolete. (As much as Clarke had a reputation for foresight, he came nowhere close to predicting how computers would be integrated into every facet of our lives by the early twenty-first century.) Rather than trying to revise Clarke’s imagined future to bring it in line with reality, Baxter and Reynolds have come up with an ingenious solution – they have written The Medusa Chronicles as a type of alternate history. In 1968, the threat of an asteroid strike causes NASA to cancel their proposed moon landing and throw all of their resources into deflecting the asteroid. Their success puts our civilisation on a different technological trajectory – one where space travel and the colonisation of other planets becomes a priority, but computing and robotics is not as advanced as real life. Baxter and Reynolds explore this alternate timeline through a series of interludes set in the late 1960s, allowing them to touch base with our era even as the rest of the novel moves into an increasingly distant and unfamiliar future.

Like Clarke’s novels, characterisation is secondary to the ideas themselves. Falcon fits this mould perfectly – he is cast more as a technological marvel than a flesh-and-blood character. His increasing detachment from humanity means that his viewpoint is the perfect vehicle to explore both the follies of the human race and the cold logic of the machines. At its heart, “A Meeting with Medusa” is ultimately about evolution, and Baxter and Reynolds have continued this theme. Falcon represents an evolutionary bridge between humans and machines, but he is the only one of his kind, an experiment that was not repeated. The novel often returns to Jupiter, where it is hinted that the future of both human and machine evolution is hidden in the deepest clouds. It also allows Baxter and Reynolds to return to the medusae who inhabit the uppermost clouds, expanding upon Clarke’s original descriptions to build an even more complex ecology and evolutionary history for the creatures.

Not content with drawing inspiration from a single short story, Baxter and Reynolds have borrowed ideas and themes from across Clarke’s extensive oeuvre. Fans of Clarke will enjoy identifying references to their favourite novels, especially 2001: A Space Odyssey and its sequels. In fact, parts of The Medusa Chronicles borrow so heavily from 2001 that the novel often feels more like a homage to that series rather than the original “Medusa” story. The climax of the story is virtually identical to the ending of 2001. However, the epilogue is pure Stephen Baxter, affirming that he is the heir to the long tradition of British scientific romance that flows from Wells to Stapledon to Clarke.

Unfortunately, their imitation of Clarke becomes both strength and weakness. The tendency to focus on technological innovation at the cost of characterisation does slow down the plot, particularly in the first part of the novel. Some chapters feel like the authors are more interested in demonstrating technological concepts than moving the story forwards. Although Clarke was often acknowledged to be weak in characterisation, there’s no need to adopt this style – both Baxter and Reynolds have demonstrated in numerous other works that high-concept science fiction can be reconciled with decent characterisation. The problem may lie in Falcon himself, whose detached view doesn’t encourage sophisticated characterisation.

The Medusa Chronicles may have all of the elements of a Clarke novel – the style, the tone, the subject – but the cumulative effect falls just short of that pure sense of wonder that defined the best of Clarke’s work. In his most innovative moments, Clarke achieved an exotic blend of science and mysticism that portrayed the cosmos as something both unfathomably alien and intimately familiar. He drew on the familiarity of our oldest religious traditions, but interrogated them through a rational, scientific framework. Baxter and Reynolds hint at that mysticism throughout their novel, but the ending feels like a worn imitation of Clarke, rather than something innovative and new. In their attempt to replicate Clarke’s writing, they may have forgotten that experimenting with the future was the key to his success.

The Medusa Chronicles is a must-have for any Clarke fan. If nothing else, it’s an excellent homage and nostalgia trip, a true celebration of everything that Clarke embodied. And it does draw attention to “A Meeting with Medusa,” which perhaps needs better recognition amongst his oeuvre. For those of you who aren’t familiar with Clarke’s work – philistines! – the novel functions as a wonderful overview of the themes and subjects that made him one of the Big Three of the Golden Age. It’s a fitting tribute to someone who shaped the genre of science fiction.

I started reading Sarah J. Maas’s A Court of Thorns and Roses series a few weeks ago and have been slowly making my way through it during a very busy time. It’s certainly not something I would normally pick up, but I am always open to new things, especially when the #bookstagram community has recommended it so highly. And it’s been an enjoyable read so far - something a could certainly describe as a guilty pleasure. . #book #books #reading #currentlyreading #bookish #bookworm #booklover #bibliophile #bookaholic #acourtofthornsandroses #sarahjmaas #acotar